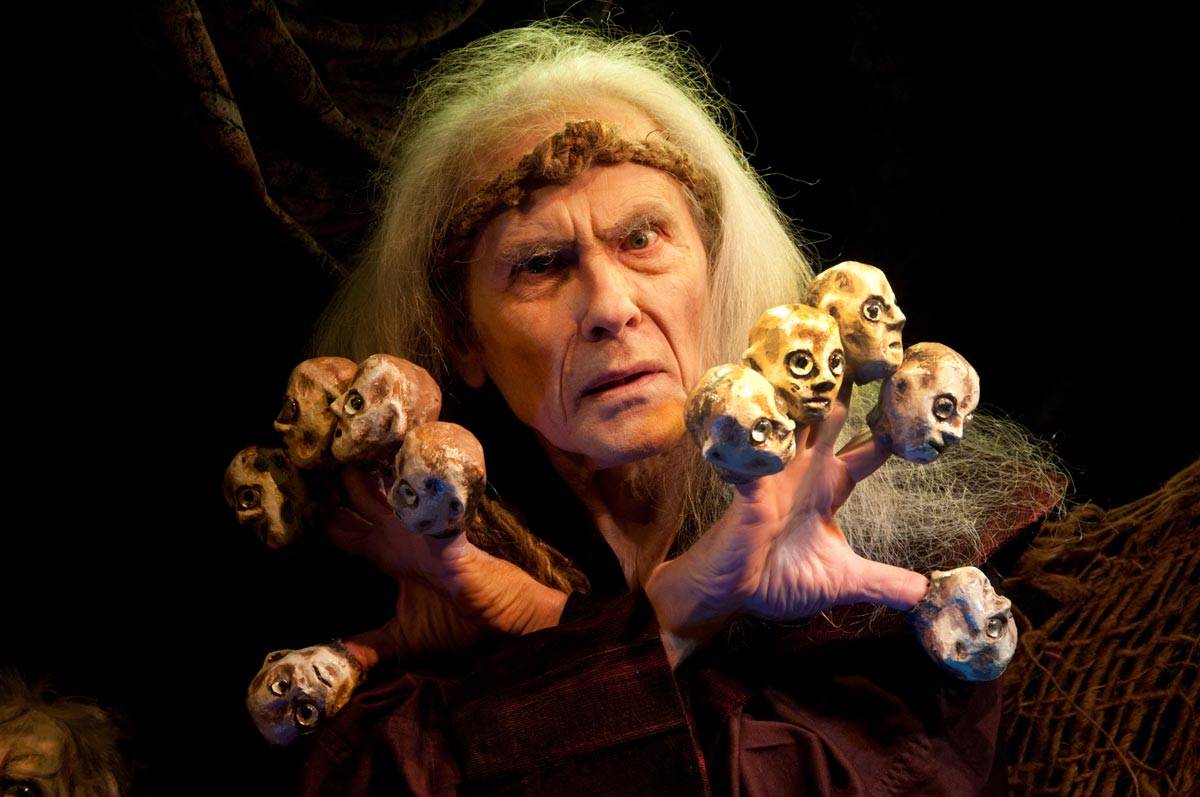 Dell’Arte presents The Independent Eye theatre ensemble’s inspired two-person vision of William Shakespeare’s King Lear. Played out within the confines of an aluminum cage, King Lear and The Fool are accompanied by nearly 30 life-sized, hand, and finger puppets operated by actors and master puppeteers Conrad Bishop and Elizabeth Fuller.

King Lear is the puppeteer of his own puppet show, obsessively playing out his loss of family, power, friendship, shelter, sanity, and hope. In his mind, he is the only real human in his motherless kingdom of power and commodity, where love is merchandise for barter. The Fool, an acid clown who goads Lear in his desperation, stage-manages his story until they both succumb to Lear’s madness. This stunning two-person take on King Lear puts an ingenious spin on The Bard’s tragic tale of power and distorted love.

“We have approached Shakespeare only when we felt that we could bring a unique vision to the work,” said director and actor Conrad Bishop. “For us, Shakespeare is uniquely suited to puppetry because the stories are deeply metaphorical, and the medium allows shifts from realistic behavior to metaphor in startling ways. And puppets allow a broad gestural life that’s true to the Elizabethan style of acting and totally absent on the live-actor stage today.

Continued Bishop, “There’s a special force in a story told in a very concentrated ‘voice’ with the channeled intensity of a nightmare, or a tiny window with great dimension. For us, King Lear is about what absolute power brings about in a man, a king, or a nation: blindness and madness passing the point of no return — what’s rampant in our halls of power today. Audiences are drawn in by King Lear’s resonance; Shakespeare’s words put a finger directly into the heart of the wound, or the wound of the heart.

More information is at www.independenteye.org.

The Independent Eye’s Lear premiered in San Francisco last April, was featured at the San Diego Puppetry Festival and on an eleven-city national tour in October 2015. Bay Area critics commented:

“Utterly convincing, often heartbreakingly so . . . Dazzlingly inventive . . . A startlingly effective and haunting Lear — more so than most that have a full cast of living actors.” — Sam Hurwitt, KQED Arts

“A work of passion and artistry … nothing short of genius.”
— David Templeton, North Bay Bohemian

“Quite frankly, I have never seen anything like it. Within the confines of a puppet stage, too cramped even to stand up, these two create a sweeping, theatrically satisfying version of King Lear that can hold its own with the work of any Shakespeare Festival in the United States.”
— Charles Kruger, TheatreStorm