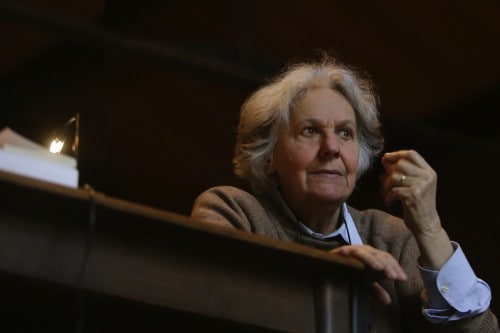 The Danish Institute for Popular Arts and Dell’Arte International invite you to the Prize of Hope 25th anniversary at Aasen Theatre in North Jutland, on Pentecost Sunday, May 24, 2015. The Hope Prize is an international award, presented in Denmark since 1989 and at Dell’Arte International in California on alternate years since 2008. The vision of the Hope award is to promote a vibrant, vital, insightful and innovative popular art.

From Aasen Theatre: “The Prize of Hope is given to a person or a theatre who has worked for human hope—in a daring, loving, vulgar, serious, poetic way, with sparkling energy– in a world where people use their eyes, ears, and voice against the consumerist thinking that is culture’s greatest threat.”

The 2015 Prize of Hope is awarded to Théâtre du Soleil and its director, Ariane Mnouchkine, whose artistic home is “La Cartoucherie,” Vincennes, Paris, France. Théâtre du Soleil is a flagship artistic organization advancing an exciting popular theatre, demonstrating the artistic power of a continuous collective. For 50 years they have been guided by their vision and along the way created a body of work woven of many dreams and driven by a fierce hope. Soleil actor Duccio Bellugi will accept the award and present films of the company’s history.

Dell’Arte’s Founding Artistic Director Joan Schirle will travel to Denmark to join in awarding the 2015 Prize of Hope and to celebrate its 25 years of recognition to theatre artists. “What a year for anniversaries,” said Schirle, “with Dell’Arte celebrating its 40th year, our Mad River Festival its 25th, the Prize of Hope its 25th, and Théâtre du Soleil is 50! I am especially proud to be presenting the 2015 Prize to Ariane Mnouchkine, who has been a personal model for me as a woman who founded a company, guided it for 50 years and still remains at the center of a vibrant artistic process. “

Théâtre du Soleil was founded by Ariane Mnouchkine in 1964 as a workers’ collective. Her aim was to create theatre outside the halls of institutional theatres, which she saw as stuck in the past. She had attended Jacques Lecoq’s school and was inspired by Jacques Copeau’s showdown with the established theatre. Mnouchkine gathered a group of young actors to work with her at a time when similar movements were happening in theatre around the world: Odin Theatre in Norway (Denmark 1966), Theatre Fool in Sweden, the San Francisco Mime Troupe in the USA and the Sun Chariot in Denmark.

Looking for a non-traditional workspace since 1964, the collective finally came across La Cartoucherie, an empty, derelict military factory and barracks in a forest outside of Paris. To open their collaborative creation “1789” in such a space in December 1970, members of the troupe had to become plumbers, masons, electricians and carpenters, as well as convincing the public to come to an unheated space to watch a show. It took until 1985 to get an agreement from the City of Paris to allow them to have legal residence in La Cartoucherie. As with every show, their latest production of Macbeth (already seen by 32,000 people) begins with Mnouchkine welcoming the audience to a lobby full of murals and posters, giving the audience a chance to peep at the actors making up—all based in their idea that theatre should involve an integration of audience, story, actors.

Mnouchkine and Théâtre du Soleil have received multiple international awards, and recognition in many world tours of their innovative productions, including House of Atreus, Mephisto, The Age of Gold, The Terrible But Unfinished History of Norodom Sihanouk, King of Cambodia as well as Shakespeare plays, and several films like Moliere, a six-hour bio-pic for French television.

Founders of the Prize of Hope are Lars Olsen and Birthe Rosenfeldt-Olsen of the Danish Popular Theatre Institute. The Danish ceremonies take place at Aasen Theatre in north Jutland, and on alternate years in the USA at Dell Arte International. Previous winners have been Nobel Prize winner Dario Fo, Tim Robbins and the Actors’ Gang, Jane Lapiner and David Simpson’s Human Nature Theatre of Petrolia, Eugenio Barba and Odin Teatret, Geoff and Dan Hoyle and many directors, actors, writers, and designers.

The festivities begin at 1:30 PM on Pentecost Sunday on May 24, 2015 and include a banquet, awards ceremony, theatre, exhibitions, music and bonfires until sunrise.

Aasen Theatre is located in North Jutland at Brødholtvej 120, DK-9740 Jerslev. Information on the 2015 Prize plus a list of previous Prize of Hope winners (in English) is at http://www.aasen.dk/index_uk.html

For a schedule of the day’s events and registration information, see below.

Schedule For Prize of Hope Activities

19:00
Dinner
Prize of Hope to Théâtre du Soleil
The Prize of Hope art-piece crafted by Klaus Tams. The award will be given at around 19.45.

Practical information:
Registration:
Payment on arrival. Registration deadline May 12, 2015 by mail / phone. Bring bedding, sleeping bags, maybe a tent. Please register to Aasen, (it is not enough with an enrollment on Facebook). Mail: info@aasen.dk or sms +45 61717343 or telephone +45 98831888