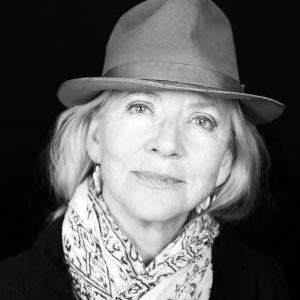 Joan Schirle is the founding artistic director of Dell’Arte International. She is an actor, playwright, director, deviser, teacher, and arts activist, whose acting work was recognized with a 2006 Fox Foundation/TCG Resident Actor Fellowship for professional development. In 2004 she was honored at the 16th Cairo International Experimental Theatre Festival as a leader in the field of experimental theatre. She served as director of the Dell’Arte International School of Physical Theatre from 2003 – 2011.

Joan has directed productions at San Diego Rep, the Alley in Houston, Bloomsburg Ensemble, A Traveling Jewish Theatre, Touchstone Ensemble, Colorado University/Boulder and Dell’Arte. A principal actor-creator with the Dell’Arte Company since its founding, she created the title role in Mary Jane: The Musical at the 2011 & 2012 Mad River Festival and again played the title role in the 2016 film version: Mary Jane: A Musical Potumentary, which won the award for Best Musical Film at the 2016 Oregon Independent Film Festival.  In 2019 she played Queenie Moon in “Going Down In Flames” by Daniel Mankin, in Portland, OR and at the Mad River Festival. Recent work includes the 5 minute mask piece, “JUNE 1, 2020” and a clown “Fireside Chat” for the 2021 Zero2 Fierce Women’s Festival at the Arcata Playhouse.

Her solo show, Second Skin, has been seen in many US cities and international festivals. She has authored and co-authored many original works for Dell’Arte, including The Weave, Shotgun Wedding, Journey of the Ten Moons, Casanova: Animal Instinct, and the trilogy of Scar Tissue Mysteries. In 2014, she conceived and performed in Elisabeth’s Book, a  touring work for the Dell’Arte Company. Her play about water issues, The Big Thirst, premiered at the 2016 Mad River Festival.

Joan is currently working on a chamber opera with composer Gina Leishman, related to the life and work of American painter Morris Graves, funded by a grant from Opera America. in March 2018 she was awarded a 3-week residency by the Morris Graves Foundation at his last home, “The Lake,” in Loleta, CA. In November 2018 she presented a collage of readings from Selected Letters: Morris Graves (University of Washington Press), at 3 local venues, and after a year’s pandemic postponement, the opera will have its first concert readings at the Arcata Playhouse in August, 2021.

She has a great interest in international exchange and has worked with artists from Brazil, Mexico, France, Scandinavia, and led Dell’Arte’s annual month-long study trip to Bali for 25 years. Joan was a featured presenter at the 2013 international conference on Commedia dell’Arte at the University of Windsor, Ontario. In 2016, with support from TCG and the Association of Arts Presenters (APAP), she began a collaboration with Norwegian/Danish sculptor Marit Benthe Norheim, creator of the Life-Boats, three mobile sailing sculptures of three stages of a woman’s life. She received an Orchard Project Residency in 2017 to further develop this project. Her essay on sailing with the Life-Boats is published in Norheim’s book From Dream to Dream, a chronicle of the 8-year project to create the boats.

Joan designed the curriculum for DAI’s accredited MFA in Ensemble-Based Physical Theatre, and is one of the School’s Master Teachers. She is a senior teacher of the FM Alexander Technique and was a plenary speaker for the 11th International Alexander Technique Congress in Chicago, 2018. Her teaching work includes movement, mask performance, commedia dell’arte, voice, and physical acting. She has devoted her research to the work of the actor as mover/creator, and the role of the actor in community. Joan has taught in MFA programs at Yale, UCSD, University of Missouri Kansas City, as well as for the artists of Cirque du Soleil. In December, 2012, she was invited to teach physical theatre at the Beijing Dance Academy in China.

Her essays have appeared in Movement For Actors (Allworth Press), Theatre Topics Devising Issue, and the 2015  anthology, A Routledge Companion to Commedia dell’Arte. The 2018 Routledge book, Physical Dramaturgy: Reflections From The Field (ed. Bowditch, Casazza, Thornton) includes her reflections. She is a member of Actors Equity Association, Voice & Speech Trainers Association (VASTA), TCG, and the Association of Theatre Movement Educators (ATME).

See also her TCG blog post, “Space, Scale, Relationship: Writing For The Physical Theatre,” on the 2014 making of the Dell’Arte Company’s Elisabeth’s Book.