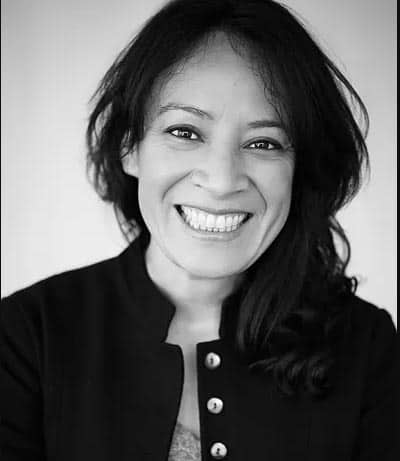 Dell’Arte is pleased to welcome home alumna Sayda Trujillo as a full time faculty member. Sayda Trujillo was born in Montreal and grew up in Canada, Guatemala and the USA. She is an actress, and theatre-maker/educator specializing in voice and movement, as well as devising original physical theatre performances.  Her performance and teaching experience abroad includes work in Guatemala, Ecuador, Singapore, Spain, Germany, Colombia, UK, Egypt, Palestine with The Freedom Theatre and most recently in India.  Her three solo shows BANANA LEAVES, DEFINITELY OOPS, and I WAS RAISED MEXICAN have been presented nationally and internationally at theater houses including La Mama ETC, RedCAT, and NYTW.   Since 2005 Sayda has volunteered for Clowns Without Borders performing for thousands of children in Latin America.  Sayda teaches Acting, Tai Chi Chuan, Contact Improvisation, Voice and Solo Performance.  She holds a BFA in Acting from the California Institute of the Arts; a post-graduate certificate in Physical Theatre from the Dell’ Arte International School of Physical Theatre; and a masters in Voice Studies from the Royal Central School of Speech and Drama in London where the training encompassed a multiplicity of workshops in Vocal Anatomy, Accents, Vocal Pedagogy, Practice as Research, culminating in a Master’s Thesis: Latino/a Voices: Reconsidering the ‘Natural,’ ‘Familiar’ and ‘Cultural’ in Freeing Vocal Expression.