Come study with Joan Schirle and Laura Muñoz in the South of France, September 3-September 9, 2017. 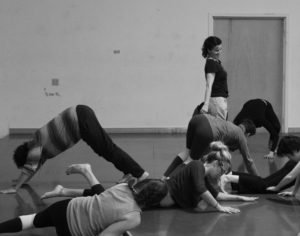 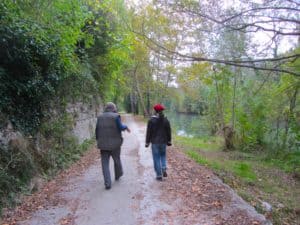 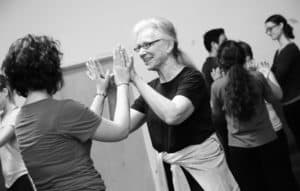 We are meeting in the beautiful town of Sauve (Blue Lake’s Sister City!)  in southern France to train, research and create dynamic theater. The focus for this intensive week will be the study and embodiment of the elements (earth, water, fire, air, and ether) to arrive at a free, authentic, and visceral physical power that can play, fully alive, in the space. We’ll look to the 5 Elements as well as to the Senses for our inspiration, with taste, touch and smells playing an equal role with our eyes and ears. We’ll play and stimulate our proprioceptive and kinesthetic senses, and our sense of life.

For 5 days we will meet for 6 hours of instruction, plus evening rehearsal time. The workshop will culminate in a final performance open to the public. Renowned chef Emily Schons will prepare for us seasonal, organic and local fare for lunch and dinner. She is a wine expert and known for her expertise in the cuisine of Le Gard, a county in southern France in the Occitanie region.

The price of 630 Euros includes instruction, accommodations, lunch and dinner.  The workshop begins on Sunday, September 3 for dinner, and will end Saturday, September 9 after brunch. It is appropriate for all actors, dancers, directors, teachers, and performers. To our Dell’Arte alumni in Europe: come, reconnect, and play with us!

The course will be taught in English.

To apply: send Laura two letters of reference and a resumé at laura@dellarte.com

Alain Schons is a designer and director whose early work in France included scenography and writing for the Théâtre de l’Aquarium in Paris, as well as teaching stage design, acting, directing, and improvisation at the University of Paris VIII. He lived for ten years in the USA, teaching at University of San Francisco and joined Dell’Arte International (DAI) in 1978, collaborating on the works of the Dell’Arte Company for seven seasons—as scenographer, co-writer, mask maker. He directed the Dell’Arte School of Physical Theatre for several years, while teaching, before returning to France.  His latest productions are “Elisabeth’s Book” for Dell’Arte International in 2014, “Tribulations de marionettes au Coeur des livres” in 2016 and “JaJa” in 2017 for Compagnie Zouak. Some of his most recent projects were part of the official selections of the Festival International de Charleville Mézières, the Châlons Street Festival; festivals in Mexico, Montreal, Tokyo, and other cities.

For more information on Sauve and Le Gard:
www.beyond.fr/villages/sauve-provence-france.html
http://www.francethisway.com/places/sauve.php