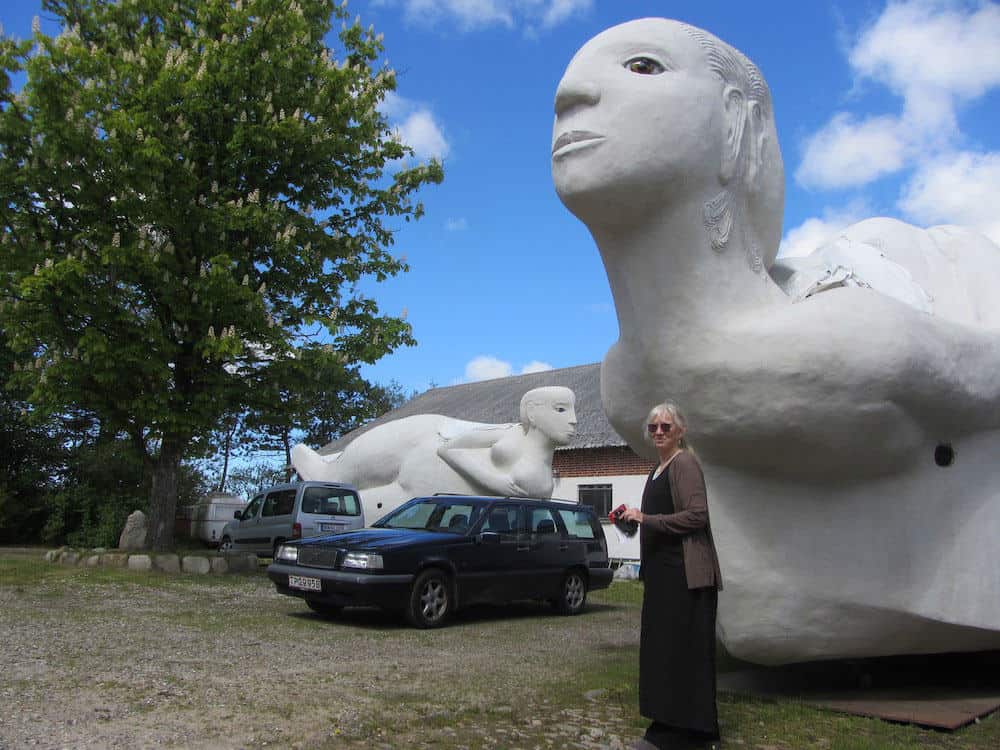 Dell’Arte International has received funding support for founding artistic director Joan Schirle’s travel to Denmark this summer to initiate an international collaboration with Norwegian-Danish sculptor Marit Benthe Norheim. For five years Norheim has been creating “Life-Boats,” three ferro-concrete, mobile sailing sculptures representing three stages of a woman’s life. The boats will be launched in June 2016 in Aarhus, Denmark, the city named Cultural Capital of Europe for 2017.

Theatre Communications Group (TCG) Global Connections program and the Association of Performing Arts Presenters (APAP) will provide combined travel support of $6000 for Schirle to explore a potential theatrical component to accompany Norheim’s “Life-Boats” on the second phase of their journey during the 2017 Cultural Capital celebration year. The Life-Boats will sail out of Danish waters into European canals, symbolizing the river as a mover of artists and ideas transcending national boundaries.

“Thanks to TCG and APAP we’re beginning a long-range, long-distance project that connects to Dell’Arte’s current local artistic initiative, The River As Home,” said Schirle. “Norheim’s work is inspirational, and I love her approach to art as accessible, mobile and multi-disciplinary. This summer we’ll develop a proposal for 2017, when my dream is to take a group of women artists from both North and South American watersheds to participate in the Life-Boats’ journey into Europe’s waterways.”

The Global Connections program was designed by TCG and is funded by The Andrew W. Mellon Foundation and Robert Sterling Clark Foundation. The initiative awards twelve grants of up to $5,000 each to foster new relationships with international colleagues that will inspire each other’s work and aesthetics by creating opportunities for cultural exchange. Now in its fifth year, this round of the Global Connections program awarded a total of $58,990 to eight projects, with over $630,000 awarded to date.

“In a time where international relationships seem defined by violence and mistrust, it’s inspiring to see these theatre artists bridging cultural differences to exchange knowledge and collaborate on new work,” said Teresa Eyring, Executive Director of TCG. “Thanks to enduring support from The Andrew W. Mellon Foundation, this round of Global Connections will connect U.S. theatre-makers with peers in over ten different countries, sharing a
diverse set of artistic practices.”

The Cultural Exchange Fund of the Association of Performing Arts Presenters (APAP), with support from The Andrew W. Mellon Foundation provides travel grants for building partnerships and relationships with international artists and presenters that will lead to expanded presenting and touring opportunities for deserving work, and support for long term development projects, residencies or commissions.

Schirle co-founded the Dell’Arte Company, which has performed at many international festivals as well as developed productive partnerships with local community groups. She has generated many international collaborations with artists from countries as diverse as Brazil, France, Sri Lanka, Mexico, and Bali, Indonesia. She has been honored for her work as an actor, playwright, director, deviser and teacher, and recently completed filming Mary Jane: A Musical Potumentary, in which she stars as Mary Jane, a role she created for the stage version at the Mad River Festival.

Dell’Arte International (DAI) comprises the Dell’Arte Company, Dell’Arte International School of Physical Theatre and the annual summer Mad River Festival. DAI is the premiere North American center for the actor-creator, offering a professional training program and an MFA in Ensemble-Based Physical Theatre, which was the first accredited program of its kind in the United States. Information about these programs as well as summer Intensives and a Study Abroad: Bali program are at www.dellarte.com Information about Life-Boats: http://www.life-boats.com/